Most of our fifth day in Ireland was spent in transit. It was about two and a half hours by bus from Belfast to Dublin, and an additional two and a half hours from Dublin to Galway. Galway was much colder than Dublin and Belfast and felt very much like a seaside town, with the scent of brine  and the sound of sea gulls clinging to the wet air. The staff at our hostel, Barnacles, were excellently friendly and claimed that Galway is one of the friendliest cities in Europe. After just a couple days, I couldn’t help but agree.

The hostel staff helped us plan some activities for our week in Galway, beginning with a pub crawl around the historic Spanish Arch. The crawl started at an “American” themed bar called “Coyotes.” It was somewhat disheartening to see what the American stereotypes were in Ireland. The bar featured flannel clad waitresses,  bar-top line dancing, and confederate flags. My sister and I wondered if the proprietors of the bar were aware of how offensive some of the decorations were. Though, it seems as though so many Americans themselves claim to not understand the offense of the confederate flag, so who’s really to blame?

However, in “Coyotes,” we made friends with a group of middle aged Irish men who made a game of pinpointing our accents. I had a ball with this! They hit nearly every English speaking country but the U.S. (including countries where English is taught but not the primary language). When we eventually told them that we were from California, they could not believe it. One of them claimed that my sister and I weren’t tall enough to be American. I couldn’t help but love the joke as it is a popular topic of conversation at home. We Americans seemed to be obsessed with height. The whole interaction was rather amusing.

Once the crawl took off, we stopped into a traditional Irish pub, called Richardson’s. They had fantastic live music from a band called “Sardines.” We sipped Magners hard ciders, listened to the tin flute with excitement, and chatted it up with a brilliantly kind young woman whose boyfriend was playing guitar for the band. The night continued with a number of lively Irish pubs and and clubs, where great music and bad dancing ensued. It was terribly fun. We continued to meet friendly locals who seemed equally excited to meet us. A few people asked us about our travels and in return gave great advice and insight into Irish landscape and culture. The crawl was overall, quite a rich experience. 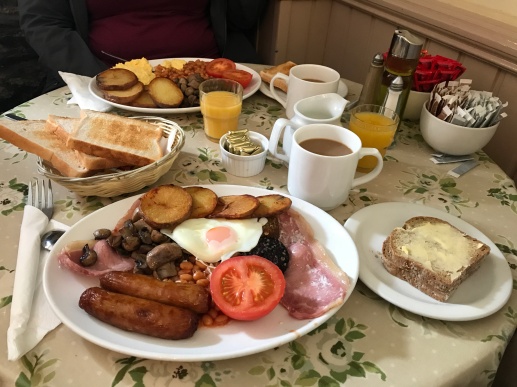 My sister and I took the next day to recover from our ill conceived attempt to keep up with Irish drinking. Given that my personal preference of hangover remedies is a hearty breakfast of eggs and fried potatoes, a full Irish breakfast, with fried egg, potatoes, baked beans, sausage, bacon, roast tomato, mushrooms, and soda bread, seemed fitting. So we set on a mission to find a vegetarian full Irish. We were fortunate that it did not turn out to be a long mission, as an establishment across the path from our hostel, had exactly what we were looking for. We popped into Riordan’s for a much needed eat. It was a bit cramped inside, as the small and homey restaurant was booming with tourists. But the food was incredible. The baked beans were some of the best that I’ve eaten and made me wish I could find some this good at home. The portions were large but not more than I could handle. Even my sister’s vegetarian breakfast featured equally hearty portions. They also served American style coffee. For this, I was overwhelmingly grateful. If you’ve been following along with my blog so far, you know how important weak coffee is to me! 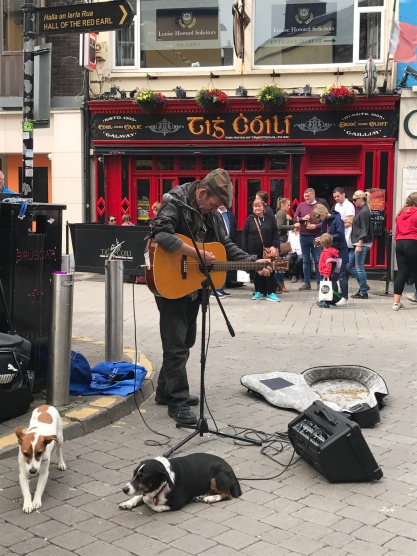 After our mid-morning breakfast, we spent most of the day exploring the Spanish Arch and the surrounding area. We meandered through an artisan street market, admiring handmade jewelry, clothing, dishware, and various other arts. We walked around parks and down the canal and through shops. However, I think the highlight of our Galway exploration was the great plethora of live music. Just walking down the street, we were greeted by more than a handful of performers, ranging in production value from standing alone with an acoustic guitar to a man who brought with him six different guitars, a microphone, several speakers, and a couple of pups who collected an audience.

At the end of the day, I spent some time in the common room of our hostel listening to another group of performers. Based on how smoothly they played together, I initially assumed they knew each other but quickly learned that they had met not half an hour before I entered the room. All three had come to Galway specifically to perform. Two younger men had come from South Africa and one older man came from New Zealand. Through their conversation, I learned that Galway did not have any laws preventing street performers. Because of this people come from all around the world to perform in Galway, as well as agents looking to discover promising buskers.

With this knowledge, walking by the performers became an entirely knew experience. The city had such a vibrant culture that contained great amounts of Irish heritage with significant international influence. Those initial claims that the people of Galway as well as those who visit tend to be the friendliest you’ll meet, turned out to be true. This was a happy place, that made it all too easy to be happy and kind whilst here.

View all posts by Sydney Hubbel